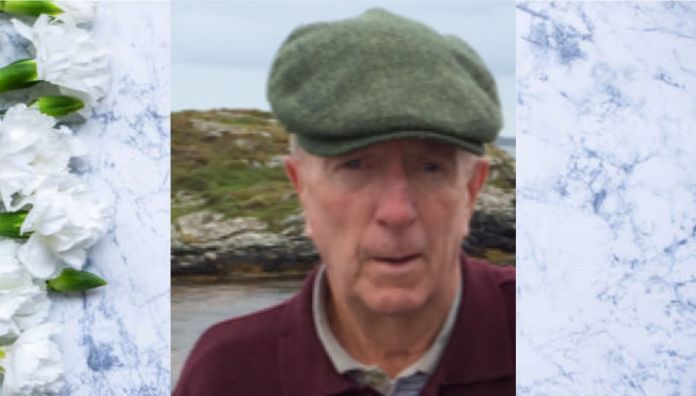 Patrick “Pat” Joseph Harding, Jr., of Cornwall, NY entered into eternal rest on October 3, 2022 at the Stratton Albany VA Hospital. He lived 90 and a half years of a wonderful life.

Pat was born in Yonkers on February 28 or 29, 1932. He always said he was a Leapling. He was the second son of Irish immigrants, the late Patrick J. Harding, Sr. (County Kilkenny) and Susanna (Byrne) Harding (County Offaly). He grew up with his big brother, Marty, his little sister, Eileen, and a houseful of foster siblings and Irish cousins just come to America. Pat was intensely proud of his Irish heritage and maintained a strong affection for the Yonkers of his youth. Everyone, he said, has some connection to Yonkers.

A rough and tumble handsome boy, who loved the outdoors and did not love school, Pat was a natural athlete. He ran and won on the track at St Mary’s and he played an outstanding third base for the 1948 American Legion National Champs, bringing his strong bat, as well. He graduated from Gorton High School in 1950 and could have gone to play for the White Sox, but instead, in September of that year, Pat joined the United States Navy to serve during the Korean War. He was an Engineman, 3rd Class, on two submarines, the SS Sea Lion and the SS Raton. Always a strongly patriotic American, Patrick was very proud and enthusiastic about his four years of service to our Nation and he loved being recognized as a Veteran.

Pat was always quite popular with the ladies, but in 1955, he noticed a tall, pretty friend of Eileen’s and they began the love story that would last their lifetimes. On May 12, 1956, he married Maurie Ann Panzer, and, together, they settled in a small apartment on Warburton Avenue overlooking the Hudson River, ready to begin their family. Busy, happy years ensued. Patrick changed jobs from a car dealership in Tarrytown to working for the New York Central Railroad, then taking a job at Geigy Chemical Company in Ardsley, while attending Brooklyn Technical College at night, for mechanical engineering. He moved his family of four to Nyack in 1961, and in 1967, Pat joined IBM Research Center in Yorktown Heights. He moved his family of seven to Jackson Avenue in the Town of Cornwall in 1967, as well, and they were done moving.

Years rushed by chock full of all the children’s ball games and school functions, with Pat working shifts, overtime, and side-jobs. As time went by, he worked his way out of the boiler room and into the desk of a second-line Manager at Research. He retired in 1992, after 25 years, and concentrated on building beautiful furniture or additions and renovations until he and his son started Velvet Greens, a small golf green aerating firm. All the while, Pat kept busy with membership in the American Legion, the AOH, the Elks, the Boosters, and with his two biggest loves, the Storm King Golf Club, where he had a 4 handicap and many records to his name, and any Irish venue, especially Loughran’s Irish Pub, where he could show off his beautiful Irish tenor and his repertoire of sad ballads.

Patrick’s gregarious nature brought him many friends through his nine decades. He was well-loved by his uddies and those of his children and grandchildren, for the unique character that he was. He had many colorful stories to tell and he never made a long story short, although he often promised this. When his sparkly blue eyes grew mischievous, you knew you were in for a prank or a tall tale, and there was nothing for it but to settle back in your chair and pour another Guinness. He is already dearly missed.

Visitation will be held from 2:00 p.m. to 6:00 p.m. on Sunday, October 9th at Quigley-Sullivan Funeral Home, Inc., 337 Hudson Street Cornwall-On-Hudson, NY. A Mass of Christian Burial will be held at 10:00 a.m. on Monday, October 10th at St. Thomas of Canterbury Church, 340 Hudson Street, Cornwall-On-Hudson, NY. Interment with Military Honors will follow the Mass at St. Thomas Cemetery, Cornwall, NY 12518.

Patrick loved animals and his life was filled with them. He would be pleased to know donations were made in his name to: Unbridled Thoroughbred Foundation in Greenville, NY 12083. This is a wonderful horse rescue organization, saving beautiful animals from a cruel death. They do the work of angels.