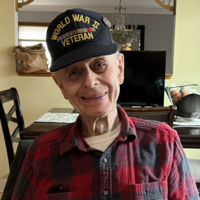 Throughout his life he has had many adventures. One such adventure was joining and serving in the United States Navy during WWII from 1944-1948 in the Pacific. He was on many ships where he would perform electrical work while in the Navy as well. When he left the service, he spent the rest of his active life working for the Local Teamsters Union 445 as a truck driver. Also worth mentioning is that William was very big on doing charity work and giving back to his community and was a strong believer in Christ and followed the Christian faith. He also enjoyed visiting with friends and family.

William is survived by his son Bill Schueler and his children William Schueler and Rory Schueler; three daughters Anna Mantovi and her husband Joe and their children Lauren Delehanty and Ryan and Lindsey Robbins; Sharon Prestel and her children Joshua Allen Prestel, Natassj Caco and John Cacho; Sandra Ropiecki and her husband Matthew and their children Ashley Cochi and Janelle Ropiecki, longtime significant other Patricia Ann Lang and her son Danny Lang and his husband Michael Murphy. William is predeceased by his beloved daughter Vicki Metzkow, his first wife Jean Tonioli, his brother Elmore Schueler, his sisters Dorothy, AnnaMae and Mildred, and his step-granddaughter Hope Mantovi.

A family statement read, “Where to start. Our father our Daddy the closest person I’ve ever met to Jesus, emulating Gods unconditional love!  I don’t know that I’ve ever seen-my Dad Really angry, he was always giving and he would give you the shirt off his back if you needed it! There’s a saying of JOY-standing for Jesus, Others Yourself and that is a perfect example of how our father, Bill Schueler lived! He was always there for me and all my sisters and our Brother. He had a way of treating each of us like we were the only one, very special! There’s not any time he wasn’t there for us and if I called him and I was in another state or needed his help he would drop things and come and get me that’s true, We are blessed to have had  a father like you! I thank you father for making it easy to have relationships because of your unconditional love I always valued myself and knew my worth God‘s unconditional love that you have for every person you came in contact with, it was  like water is to a flower. I’m glad while you were here on earth we were able to share these words with you too but the world should know who you are and who you were because this world today needs more men like you! When God made you daddy he broke the mold yes that’s true the way you would always see things through. We thank you for being you and now your home with Jesus in heaven, we will miss you! As you would say, until we meet again.”

Visitation will be held on Sunday, May 22 from 2 to 4 p.m. at Brooks Funeral Home, 481 Gidney Ave., Newburgh, NY. A prayer service with Military Honors will take place at 3:45 p.m.