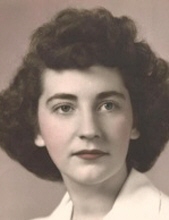 She was a lifelong parishioner of St. Patrick’s Church, Newburgh. She was the co-owner of McGough Plumbing and Heating and previously worked as an Operator and Operator Supervisor for New York Bell Telephone for 25 years beginning in 1939. Claire lived nearly 100 years and was the oldest of eight children. She was also a Gold Star Widow. Claire married Robert G (Pop) VanVoorhis of Newburgh, in Wilmington, North Carolina, on March 9, 1943. They had one child, Johnny VanVoorhis. She was widowed on April 4, 1945, when Pop heroically gave his life during the United States invasion of Okinawa, Japan. After World War II, Claire was a successful, single, working mother and homeowner. She later married another Pacific War veteran, John Flannery. They were married for nearly 60 years.

She is survived by her sons; John Van Voorhis of Newburgh, Brian Flannery of Newburgh, and Sean Flannery (Christi) of Fayetteville, AR; her daughters, Claire Van den Briel (Vincent) of Liberty Township, OH, and Maureen Flannery of Newburgh; and her grandchildren: Justin Van Voorhis, Mary Flannery Jacob (Chris), Julien Van den Briel, and Patrick Flannery. She is also survived by her sister Elizabeth (Bette) Maher of Sylmar, CA, her sisters-in-law, Angie Bloomer and Marcella Bloomer of Newburgh and many nieces and nephews. She will be especially missed by her beloved niece, Susan Havens Trapani of Milton, NY.

Donations to the Kaplan Family Hospice Residence in memory of Claire are encouraged. (https://hospiceoforange.com/donate-now/)

Arrangements are under the care of White, Venuto and Morrill Funeral and Cremation, 188 N. Plank Road, Newburgh, NY 12550.