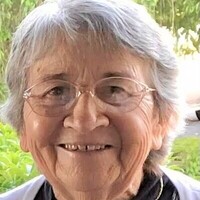 Estelle M. “Honey” (McDermott) Whalen passed away peacefully on Thursday, April 14th, 2022 at home surrounded by her family at the age of 91.

Estelle was born on September 5th, 1930 in Newburgh, NY to John J. and Margaret M. (Haley) McDermott. She attended St. Patrick’s Grammar School and graduated from Mount St. Mary’s Academy. As a lifelong resident, she treasured growing up in Newburgh with her five siblings and raising a family of ten children.

On June 12th, 1954, she married the late George “Bud” Whalen, with whom she shared 61 loving and happy years. Estelle retired as a Supervisor from the New York Bell Telephone Company to devote her life as a wife, homemaker, and mother. Family, faith, friends (and food) were essential to Estelle’s being. Anyone who knew her children knew that she was a star in their eyes, and that meant the world to her. She relished being the central figure and matriarch in their lives.  She was the proud recipient of the New York State Elks Association Mother of the Year award in 1985.

Estelle was passionate about making the world a better place—giving to those in most need (which included prayers)—and deeply believed in leaving everything a little better than it was found. She was unapologetically herself, a truth seeker and truth teller, and never shied away from stating her opinion or using her voice to advocate for the voiceless and the unborn.

The Whalen Family would like to extend their deep gratitude for the great care and compassion by the nurses and staff of Hospice of Orange and Sullivan Counties.

Visitation will be held from 4 to 7 PM on Monday, April 18th at Brooks Funeral Home, 481 Gidney Ave, Newburgh. A Catholic mass will be held at 11 AM on Tuesday, April 19th at St. Patrick’s Church, 55 Grand St, Newburgh. A private interment will take place at a later date.

In lieu of flowers, memorial donations in Estelle’s name may be made to Orange County Right to Life, P.O. Box 51, Washingtonville, NY 10992 (where she was involved in helping to “save the babies”); or Hospice of Orange and Sullivan Counties, 800 Stony Brook Ct., Newburgh, NY 12550 (hospiceoforange.com/donate).