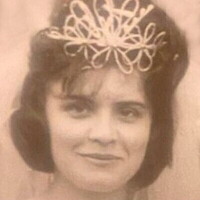 Demetra Matthews, nee Demetra Kiamos, passed away peacefully on Monday, March 21, 2022, at the Kaplan Family Hospice Residence. Demetra, lovingly called Demi by many of her friends, was 76 years old.

Demetra was born in Geraki, Laconia, Greece, the daughter of the late George and Marika Kiamos. The eldest daughter in a family of six, she was sent away from her village home to live in Athens with her two oldest brothers at a young age. A woman with a brilliant mathematical mind, she only received a sixth grade education. She was married at the age of 18 to her husband Peter Matthews, who brought her to the United States in 1964, looking to settle in Newburgh, NY, where he had already established a residency. Thinking she was experiencing motion sickness on the boat ride from Greece, she discovered she was pregnant and gave birth to her first child at St. Luke’s Hospital, a few months after arriving in the United States. She described long lonely days talking to her baby boy on their walks in Downing Park until she acclimated to her new home.  She proudly became a United States citizen on March 6, 1970.

A long time member of the greater Newburgh Greek community and St. Nicholas Greek Orthodox Church, she remained married to her beloved Peter for over 50-years until he passed away almost four years ago. She is survived by her son Paul Matthews and his wife Zoe Matthews, her daughter Joanne Matthews Forbes and her husband Richard Forbes, her grandchildren Matthew, Peter, Jamie and John, all of Newburgh, NY. She is also survived by one brother in the United States, Lefteris Kiamos, his wife Maria, their son George Kiamos and his wife Kaitlynn, all of Newburgh, NY. She is also survived by her brother Christos and sister Andromahi, and their families, who remain in Greece.  She was predeceased by her siblings John Kiamos and Vasili Kiamos, whose families also remain in Greece.

Demetra will be remembered for her warm personality and infectious smile. She loved people, making many friends as a life long member of the Newburgh Community. She was a waitress at Jimmy’s Restaurant on Broadway for over 25 years, and later worked at Anna’s Restaurant. Her children would laugh at the number of people who would randomly stop her in the grocery store or mall, just to say hello and tell her children how much they loved her and how lucky they were to have Demetra as their mother. Her natural mathematical skills served her well in her occupation, but also make her a skilled card player, which she enjoyed with her friends. Regarded by many as the “best cook and baker in the land”, she enjoyed baking for friends and family, always spreading out a feast to visitors to her home and also surprising those who touched her heart by taking her love baked cookies to those who were home bound, or in hospitals, when she could. You could always find her at the Greek Festival in Newburgh making “Loukoumdes” and laughing with and greeting her friends from the Community. She was a  dedicated and loving wife, mother, grandmother, aunt, cousin and friend. Having been deprived of the opportunity herself, she emphasized education to her children and grandchildren, and every young person she met. Indeed, she would grow frustrated if she saw a young person not taking every educational opportunity given to them. Her grandchildren and all of their friends lovingly called her Yiayia (Greek for Grandmother) or the “Great Woman”.

Visitation will be held from 4 to 8pm, with a Trisagion Service at 7pm on Thursday, March 24th at Brooks Funeral Home, 481 Gidney Avenue, Newburgh, NY. A funeral service will be held at 12pm on Friday, March 25th, coincidentally Greek Independence Day, at St. Nicholas Greek Orthodox Church, Newburgh, with burial following in Cedar Hill Cemetery, Newburgh. In lieu of flowers, donations can be made to the “Peter ‘the Great” Matthews Memorial Scholarship Fund” (which has been awarded annually for the past three years) which will hereafter be renamed the “the GREATS Scholarship Fund” which awards an annual scholarship to a graduate of Newburgh Free Academy High School.