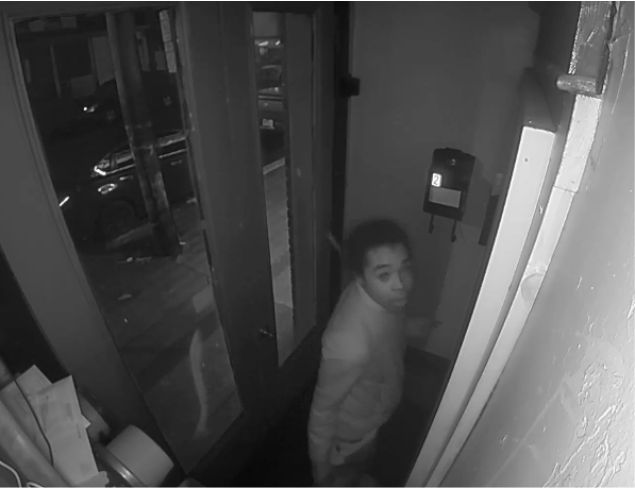 Lock your house doors, windows, and car doors. Last night was busy with prowlers lurking around neighborhoods looking for other people’s belongings to steal – or worse.

At 11:38pm last night, video captured a woman walk onto the front porch of a house in the City of Newburgh. After the prowler got done searching the resident’s mailbox, she then decided to start peeking into a front house window. Seeing that the coast was clear, she attempted to open the window, but it was secured and she could not enter.

At 2:34am this morning, the same prowler attempted a home break-in near Delano-Hitch Park in the City of Newburgh. The potential burglar entered a vestibule in a duplex house and tried to open the door to someone’s residence. When the prowler looked up and noticed a security camera, she tried to steal it. She was unable to detach the camera and left. According to a resident, the prowler was arrested and taken away by police.

Another resident reported their car was broken into and ransacked near the Newburgh waterfront sometime overnight.

Around 12:45am this morning, another resident reported four men were walking along the road outside his house in the City of Newburgh. One of the men walked up the resident’s driveway and tried entering the car. Meanwhile, the three other men tried entering other cars parked on the side of the streets. The same foursome came back at at approximately 2am. The resident reports the police were called but nothing could be done.

Another City of Newburgh resident reported that someone entered their car overnight and stole personal belongings. The crook left a knife in the victim’s car during the theft.

This comes after a recent rash of suspicious people walking the streets in residential neighborhoods in New Windsor in the middle of the nights. Individuals were caught on numerous security cameras walking up driveways and trying to get into cars. The New Windsor Police increased their presence and the activity appears to have subsided – for now.