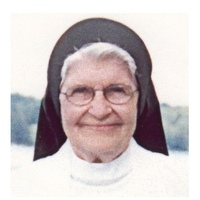 Sister Mary Carolyn Meehan, OP of the Dominican Sisters of Hope, died on  March 16, 2022 at St. Luke’s Hospital in Newburgh. She was 97 years of age. The daughter of the late William Joseph and Caroline Smith Meehan, she  was born March 5, 1925 in Newburgh, New York.

Sister Mary Carolyn entered the novitiate of the Dominican Sisters of Newburgh on May 30, 1946, made her First Profession December 23, 1947, and Final Profession  August 27, 1951. She earned her BS in Elementary Education from Mount Saint Mary College in  Newburgh, NY.

Sister was always very conscious of the less fortunate and made an effort to give of herself with  both time and treasure supporting organizations that served them.

In addition to her parents, Sister is predeceased by her siblings, Jacqueline Meehan, Rev.  Warren E. Meehan, SSJ, Thelma Meehan and William Meehan. Sr. Mary Carolyn is survived by  her sister, Eileen; her nieces, Maureen (Kenneth) Smith of New Windsor, Jacqueline Meehan of  New Windsor, Kathleen (Carroll) Welt of Rock Tavern. She is also survived by her great nieces,  Kelly Smith of Pa., Eileen Welt of South Carolina and great nephews, Paul (Rachel) Welt of  Montgomery and Dr. Kenneth Smith of Manhattan and their children.

A celebration of Sister Mary Carolyn’s life will take place on Wednesday March 23, 2022, at the  Dominican Center, in the Chapel of the Most Holy Rosary, at Mount Saint Mary College,  Newburgh, NY. The viewing will begin at 9 a.m. followed by a wake service at 10:15 a.m., and  the Mass of Christian Burial at 11 a.m. followed by the burial in the Dominican Sisters of Hope  Cemetery on the grounds of Mount Saint Mary College.

Donations in Sister’s memory can be made to the Dominican Sisters of Hope Development  Office, 299 North Highland Ave, Ossining, NY 10562.