House Explodes in City of Newburgh 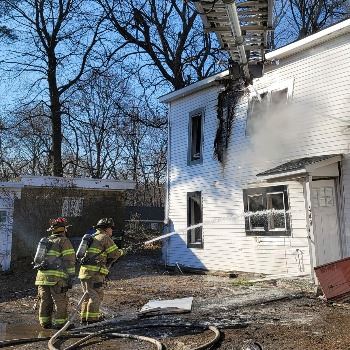 An explosion occurred inside a house at 449 First Street in the City of Newburgh late this afternoon. The residence is located between Fullerton Avenue and West Street, just a few blocks away from Newburgh Free Academy.

The house is two floors, measuring approximately 40 feet by 30 feet.

The City of Newburgh Fire Department received the call at 4:17pm. The first firefighters arriving on the scene reported a fire in the basement. Firefighters quickly determined an unknown type of explosion occurred and the building was compromised.

However, as fire apparatus began entering, the commander determined that natural gas had caused the explosion, the structure was becoming compromised, and pulled all firefighters outside to conduct an exterior attack.

Forty minutes into the fire, Central Hudson still did not respond and an active gas leak continued feeding the fire in the basement. Fortunately, firefighters were able to knock down the bulk of the fire elsewhere throughout the house.

One hour and ten minutes into the fire, Central Hudson finally showed up and shut off the utilities. Firefighters were able to knock down the rest of the fire and begin overhaul. Off-duty City of Newburgh firefighters were called in, and Coldenham and Good-Will were released from standby.

It is still unknown if any injuries occurred.