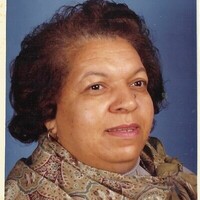 Alice Russell Ware passed away one month shy of her 92nd birthday on March 10, 2022. Alice was born in Williamsboro, North Carolina on April 11, 1930 to Howard Russell and Lucy Sneed Russell.  She was a member of the Flat Creek Baptist Church, and also attended services at Nutbush Baptist Church.  She attended Williamsboro Grade School, and later attended Henderson Institute through the 12th grade.  She attended A & T College in Greensboro, North Carolina.  In college, she majored in Commercial Education from 1950 to 1953.  During that time, she worked summers in New Canaan, Connecticut, providing child care for a family.

Alice came to Newburgh, New York in the early part of 1954.  That’s where she and William Ware met, and later married.  They had three children, Garland, Pamela, and Ronald.  Alice was a Den Mother for the Cub Scouts, a member of the Eastern Star, and a member of Ebenezer Baptist Church.

In 1968 Alice began working as a Teacher Aide in the Newburgh School System.  During that time she also took courses at Harriman College in Harriman, NY; Mount Saint Mary College in Newburgh, NY; and the State University at New Paltz, NY.  She retired after 24 years of working in Newburgh schools – Grand Street School, Montgomery Street School and Gidney Avenue Memorial School.  Her last ten years were spent in the field of special education at Gidney Avenue Memorial School caring for and educating severely handicapped children.  She retired in 1992, and enjoyed babysitting for her three grandchildren, being a good homemaker, assisting her daughter-in-law with her day care business, assisting her daughter in the classroom; traveling, gardening, homemaking, and spending time with family and relatives.

A close family friend, Evelyn Owens, predeceased Alice in 2019. Special thanks to the Steve Owens family.

Thanks to Joe Karam for being a very helpful and caring neighbor.

Thank you to the staff at US Renal Care of Newburgh, NY; the staff at Fresenius Kidney Care; the staff at Montefiore St. Luke’s Cornwall Hospital; and Hospice of Orange and Sullivan Counties, Inc.