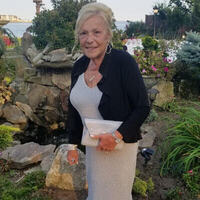 Yvette (“Eve”) Donegan-Clyde, age 76, passed away after a long, courageous battle with Alzheimer’s Disease on Wednesday, March 9th.  Eve was born on February 8th, 1946, in Belgium where she was orphaned shortly thereafter and in December of 1953, was adopted into the loving, New York home of her parents, George and Paula Fraser.

Her father unfortunately passed away early in her life, leaving Paula to raise Eve on her own.  Eve and Paula shared a special, loving relationship that was envied by all who knew them.  Eve excelled in everything she did; she was an exceptional Mother, Grandmother, Wife, Friend, Author, and a sympathetic listener to all who had the pleasure of knowing her.  She attended Ladycliff College in Highland Falls studying Child Psychology.

At the age of 46, she married her loving husband, John Clyde, and they spent 30 years married and shared a beautiful life together traveling and dancing across the world.  Eve spent many years as a realtor and was admired by her colleagues and customers.  She had a passion for oldies music and often went to concerts and shows whenever she could.  Eve was an active, caring woman who spent most of her life thinking about others.  A cornerstone of her caring nature was her founding, along with her husband, of “New Beginnings” support group which met in New Windsor for most of 1990s and early 2000s.

She always surrounded herself with her friends and family, which is where she felt most comfortable and loved.  Eve is survived by her husband, John Clyde, her son, Tom Donegan, of TN and his fiancée, Elisabeth Mensch, granddaughter, Kathleen Donegan of VA, stepson, Alex Clyde, and his wife Bonnee, three grandsons, Bryce, Haydn, and Deven Clyde, her second adopted family, The Clydes and many friends including Karen Donegan, Annie, Crystal, Rhonda, Debbie, Melanie, and Tammy.  She was predeceased by her mother, father and first husband, Thomas F. Donegan.

Cremation will be at the convenience of the family.  A celebration of Eve’s life will be held on Saturday, April 23rd between 2:00 PM and 4:00 PM at Brooks Funeral Home, 481 Gidney Avenue, Newburgh, NY 12550 (845-561-8300).  The family wishes memorial contributions be made to the Alzheimer’s Association, Hudson Valley Chapter (https://www.alz.org/hudsonvalley).